You are here: Home / About

I have been building my practice as an Integrative Nutrition Health Coach for nearly two years, but I have been studying nutrition and researching theories for well over a decade. Like most of my generation, I grew up eating boxed cereals for breakfast, a sandwich for lunch, and though I had the benefit of mostly home-cooked dinners, they incorporated processed foods and margarine, which I would do anything to avoid these days. 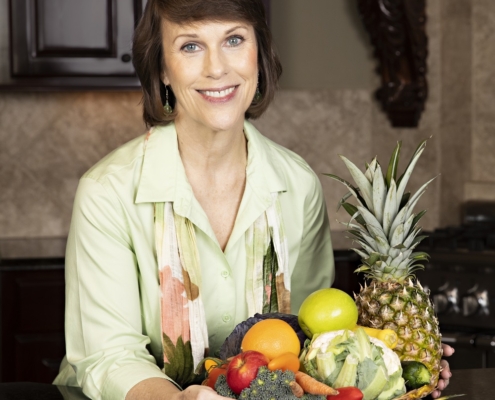 What really cemented my interest in nutrition was seeing its effect in my own family. I am the mother of three sons, and I homeschooled them through high school graduation. Every homeschool family experiences ups and downs from day to day – ask any parent who is with their children 24/7 and add in academic studies – but I had some particular challenges with one of my sons. He was very bright but easily distracted. Staying on task was a significant challenge.

One day, when close to my wits’ end, I heard a radio interview of parents of children with ADD/ADHD, and it was as if they were describing my son. That was the first step, but what I was going to do with that information? I wasn’t willing to have a doctor confirm my suspicion and press us to use a prescription drug to control his symptoms. This was before the internet, so I started my research at our local library, where I found a book by Dr. Benjamin Feingold, Why Your Child Is Hyperactive.

Dr. Feingold’s specialty was pediatric allergy, and he had discovered that when some of his patients were taken off artificial colors and flavors their hyperactive symptoms went away and they were able to come off of their medications. That got my attention! Dr. Feingold presented a dietary protocol that removed these culprits from the diet and walked us through the process of cleaning his system. We made the decision to give it a try.

The first trip to the grocery store was a long process as I had to read every label to ensure that there weren’t any artificial colors or artificial flavors. There were a lot of products I used to purchase that were no longer going in my shopping cart. I was amazed to find out that margarine and yellow cheese are artificially colored, as are many boxed cereals and, of course, Koolaid and Jello.

We worked our way through the modified diet protocol as a family, and saw improvements. By the end of the first two weeks, it was quite obvious that the change in foods had contributed to much calmer behavior and, essentially, a different child. As we continued with the protocol, we had several confirmations of the affects of artificial colors and flavors. When my son would have a snack at a friend’s house that included these ingredients, he would exhibit hyperactive behavior within a short time.

Could there really be such a significant effect caused by ingredients that are approved for use in our foods? Yes! It clearly demonstrates that the consumer must be proactive and aware of the effects that food choices have on their health. That was my first “ah-ha” moment related to foods and the way they can affect our bodies. Since then I’ve been propelled to research, experiment, and pursue further training to equip me to support others in determining what foods serve them best as they reclaim control over their health.

Who are your clients exactly?

I have a heart for women who have poured out a large part of their lives for others, whether you are a busy professional woman who has given priority to building a career or a mother who has focused on raising a family. You have spent so many years serving others, pouring yourself out for their benefit, that you’re not sure how to shift and care for yourself. Often you feel lost in the crowd and drained of energy. You are caught up in old habits and don’t know how to make changes – that is, if you knew what changes are necessary. Your clothes are feeling tighter as the weight creeps on, your mood swings keep you and the people around you guessing, and your energy lags at mid-day if you even had any when you woke up this morning. Then there are those nagging physical symptoms or a recent diagnosis that makes you feel old before your time. I’ve been there, and I can help!

How are you different from other health professionals?

I have been where you are in seeking the help of a health professional who gave me just a few minutes to share my symptoms and usually responded with a quick answer, whether in the form of a prescription, or direction to make a major change (such as “eat less and exercise more”) with no further details.

I don’t have one answer for everyone. I explore your history, your challenges, and your habits to determine what is serving you and what isn’t. My training has included a wide variety of nutritional theories so that I have a range of resources, but the key is to explore how foods affect you and what works best in your body. This isn’t necessarily a fast process, yet it provides the answers that support lifelong improvement. Most important is that I walk through the process with you in evaluating options and strategizing how to put them into action.

For what type of person is this program not going to work?

My program, and my approach, will not work well for the person who expects a quick answer. Let’s face it – you didn’t get in your current situation in a matter of days or weeks, and you can’t expect to reverse it that quickly either. Do you want to correct the problem or just squelch the symptoms?

My program will not work for someone who is unwilling to make changes either. You can’t expect to continue doing what you have been doing and get different results.

What does your program involve?

I am currently offering personal coaching in a four-month program that includes educating you on foods to feed your body and self-care to feed your soul, guiding you through making adjustments and changing your habits, all with the purpose of reaching the goals that are most important to you.

What results can I expect?

My clients have experienced improved digestion, loss of excess weight without counting calories, sleep that brings fresh energy in the morning, and increased happiness as they nourished both their body and soul. Whatever your goals, these results will contribute to meeting those goals as well. What are you waiting for?

How quickly can I expect results?

Some of my clients have experienced improvement in a short period of time. Your current health condition, and the medications you are taking, will influence the speed at which you see results. Remember that your current condition did not develop quickly. The nutritional approach focuses on rebuilding at a cellular level which necessarily takes time, but will also restore life.

How will we work together?

We will meet 2 times each month either in person or via Zoom if you don’t live in my immediate area. With each meeting we will discuss how you are doing, I will teach you new principles, and help you strategize how to incorporate these new principles in your walk toward health.

Do you take credit cards?

Okay, I think I’m ready to get started but I have a few more questions. Can I call you?

Certainly! Click here to schedule a time for us to talk about your needs and answer your questions.

This site uses cookies. By continuing to browse the site, you are agreeing to our use of cookies.